​ "BREAK THROUGH" ON CANVAS, BOARD, AND ALUMINUM

Painting this series exposed the essence of where I was and how far I have come.

​When it came time to name this series, I first chose Serenity because that’s how it felt to paint them. I don’t know how it all happened. It just showed up. It was almost an out of body experience for months. I gave myself over to my muse. I didn’t question. If any technical problem showed up, the answer appeared the next morning. In that sense it was serene because I didn’t have to work at it. I just got into the river and let it flow. but the path leading me here was anything but serene. This series has a nice, shiny surface, it’s glossy. You can touch the painting without hurting the it. But there are two things happening here: first, it’s reflective so when you stand in front of the painting, you can see yourself on the surface if you focus on the glossiness. Second, it’s composed of many layers, like the layers of pain and confusion I fought through to create this series.

I re-named the series Break Through because several years ago, because I broke through an invisible barrier. It was only after I healed from a serious health problem that demanded heavy pain meds and a seemingly endless search for an answer; was it something I could physically heal, or was it emotional, or was it part of my spiritual path (many seekers are faced with horrible physical setbacks on the way to clarity and compassion).

All my life I’ve worked to understand how this world works and where I fit in.  All of a sudden, the instrument I used to do that wasn’t working the way it had been. The prescriptions dulled the pain but thickened the fog around my brain and all but crushed my spirit. My way of life came to a screeching halt. When you are stripped of all that you do, all that you learned, even when it's temporary because at the time you don't know how long it will last and only have the now, it just becomes life. You are left gazing at the core of who you are.  What makes you, you. Until it changes and you no longer have a weekly doctor's visit and loose touch with your neighborhood pharmacist. You emerge  a slightly different version than who you were before, before the trauma. Now you are free and lighter. When you are an  artist, the story is best told in the studio, through your art, like you've always done.
​
Minimum 25% discount from listed prices.
Make an early appointment or come to the special Silicon Valley Open Studio sale,
​for in-person blowout sale prices where you just about name your price.
​
​"The Way Of Water" 60x48-in acrylic on aluminum
call
​Break Through series was featured at the February-March 2019 exhibition at The Main Gallery in Redwood City, CA 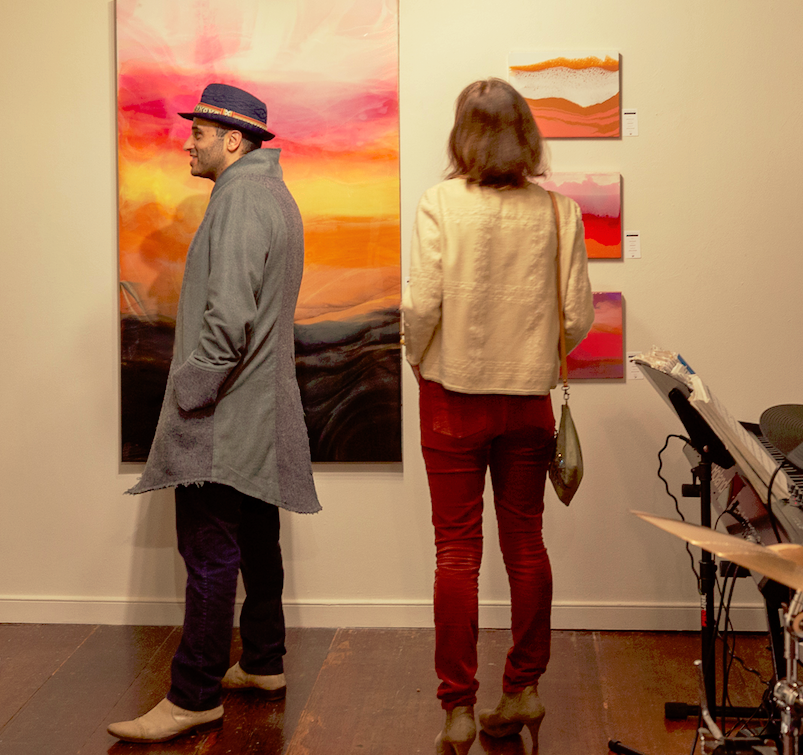